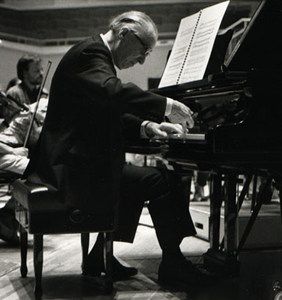 His exceptional musical talents were freely fostered by his family (his father was the Director of the Le Mans Music Conservatory and his mother was a voice teacher) These talents were so extraordinary that his illustrious teacher Nadia Boulanger, to whom he was entrusted for his musical training at the age of ten, wrote to Françaix’s mother "Madame, I don’t see why we should waste our time teaching him harmony. He already knows harmony. I don’t know how, but he knows it; He was born knowing it. Let’s work on counterpoint". The same year, he wrote "Pour Jacqueline", work dedicated to his younger cousin and published two years later by the Sénart Editions.

The following year, in 1923, Maurice Ravel (in a letter in response to a manuscript by Françaix) encouraged the young composer to continue in the path he had chosen, writing notably "Among this child’s gifts, I especially remark the most fruitful that an artist can possess, that of curiosity."

At the age of 18, he obtained his First Prize in Piano, in the first place, at the Paris Conservatory. Two years later, he was chosen with Claude Delvincourt, to represent young French composers at the Vienna International Festival, where his "Huit Bagatelles" was performed to great acclaim.

The success of his Concertino for Piano and Orchestra (1932) was the first of many and his compositions were conducted by the most renowned conductors of that time: Paul Paray, Hermann Cherchen, Pierre Monteux, Eugene Ormandy, Manuel Rosenthal, Herbert von Karayan, Antal Dorati, Pierre Dervaux, Seiji Ozawa, Georges Prêtre…

He wrote the music for sixteen ballets, which were produced by famous choreographer such as Léonide Massine ("Scuola di ballo" , by the Ballets Russes at Monte-Carlo in 1933), Serge Lifar ("Le Roi nu", at the Paris Opera in 1935), Roland Petit ("Les Demoiselles de la nuit" , on a libretto by Jean Anouilh, at the Paris Opera in 1948 and at La Scala of Milan), Georges Balanchine ("A la Françaix" in 1951, after Françaix’s "Sérénade" , by the New-York City Ballet), These four ballets, as well as the ballet « Les Malheurs de Sophie" were recorded by the Ulster Orchestra, under the baton of Thierry Fischer.

His last ballet "Pierrot ou les secrets de la nuit", from a Michel Tournier’s text, was produced in 1988 by the Regional Theater of Salzburg under the direction of Jean-Philippe Rouchon.

His greatest work, "L'Apocalypse selon Saint Jean", for chorus, four soloists and orchestra, was premiered in 1942 under the baton of Charles Munch, and was later presented in Berlin, in London, and in Italie at the Cathedral of Montreal in 1961

In 1997 this oratorio was again performed in Göttingen and Linz with the Göttingen Symphony Orchestra under the direction of Christian Simonis (with a first recording on CD).

The work was reprogrammed several times in Paris, Stuttgart, Munich, Paderborn, Würburg,Tübingen and Friburg, including a performance in 1999 at the Cathedral of Le Mans, which has inspired the work (and a second recording by the Orchestre Français d’Oratorio conducted by Jean-Pierre Loré).

He also composed five operas and comic operas, including "La Main de Gloire" performed in 1950 and in 1951 in Bordeaux , and "La Princesse de Clèves", premièred to great success in Rouen in 1965. Other vocal works remain to be rediscovered, such as "Le Diable boiteux", encored in its entirety at Carnegie Hall in 1950, "Trois Poèmes de Paul Valéry" and "l’Ode à la Gastronomie", both written for a cappella choir.

Françaix’s chamber music (from two to ten instruments, with more than fifty works in total) is constantly played and recorded worldwide (his Trio for Strings, Wind Quintet No1, "Petit Quatuor pour saxophones" and "Tema con variazioni" have all become classics), as well as most of his concerti for solo instrument and orchestra (approximatively forty works, covering almost all of the orchestral instruments), the best known of which are "L'Horloge de Flore" (1959), for oboe (or soprano saxophone) and orchestra, and the "Concerto for clarinet and orchestra" (1967).

But, indicative of the times, it is probably for his film scores for Sacha Guitry (including the famous "Si Versailles m’était conté") that Françaix’s reputation with the general public was established in his own country.